The History of Oregon Society of Artists 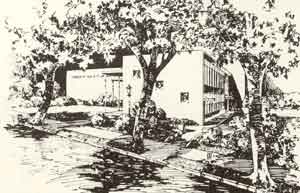 At that time there was considerable confusion in the old Portland Art Museum because some members felt they were being pushed aside by aggressive “Faddists and Abstractionists”. So, late in the fall of 1926, Mr. William Gray Purcell, Art Editor of the local magazine, SPECTATOR, an architect and conservative artist, called a special meeting of likeminded individuals.  Its purpose was outlined:

In early 1927, an organizational meeting was held at which William Gray Purcell was elected President and they titled the organization: The Society of Oregon Artists.

The Portland Art Museum included The Society of Oregon Artists (SOA) in their activities and were glad to have them meet and exhibit in their building. In return, SOA helped the Museum with their financial difficulties, both individually and as a group. However, when PAM received county assistance, it developed that the policy of the Museum's Curator and that of the SOA were not the same, so it was suggested that SOA find another place to meet.

On December 9, 1929, SOA decided to incorporate, and as the name "Society of Oregon Artists” conflicted with an older society, the name was changed to Oregon Society of Artists.

The Society met at Clyde Leon Keller’s art studio for many years. He was the third president and did much to see that the control of the Society was kept in the artists' hands. Membership was a "Who's Who" in Portland's art world.

OSA was offered a choice building site at Depoe Bay, in 1932, providing it would build and make its headquarters there. But it was decided that it was too far from the center of its activities.

In 1939-40 the Society rented the old schoolhouse on Sauvie’s Island but even that too was too far from Portland. OSA felt the need for an educational and cultural center of their own, a place where artists could work and display their pictures free and as a service to the public. A Building Fund was created.

The proceeds from classes from the likes of Arthur A. Selander, Ed Quigley, Kate Raymond, and Colista Dowling, picture sales, bazaars, rummage sales, and many other activities went into the Building Fund, making construction of the building possible.

Though many of the members lived on the east side, it was suggested that OSA purchase the beautiful old formal garden of Mrs. T. B. Wilcox as the site for the new building. The beauty of the site and the flowers sold the artists. It was valued at $20,000, about four times the amount in the building fund.  The owner, Mr. Nathan Sohn, was invited to an OSA meeting and was so impressed by the group, he became a member and donated $2,500 towards the purchase. He then let the Society make its own terms on a low interest loan covering the remaining $17,500. The land was purchased in April 1953.

Thayne J. Logan, Architect and Lyle Keeler, Contractor, donated their services and the use of their equipment and organizations to build the building. Nearly everybody participated, either by giving labor or proving meals to the works. It was a "Do it Ourselves" project, and no public funds, donations, foundations or subscriptions were asked for, nor were they offered.

In 1940, BrushMarks was created. Helen Logan was the first editor-in-chief, printer, mailing clerk and distributor.

On Thursday, September 23, 1954, the first meeting was held in the new building.  At the Christmas Party, December 1956, the mortgage was burned, and the building was now the Society’s.

Just three years later, in 1957, a temporary storage room, 12' x 20', was added to the northeast corner of the building with labor again being donated by OSA members. Membership and activities continued to expand and in 1959, Thayne Logan drew the plans for a one-story and daylight basement addition.  The new wing was built in 1960. In 1965 the parking lot was built. Members filled and planted shrubs by donated labor.

In 1981, it was determined to establish membership by election of the Board and Membership vote, the main requirements being an interest in conservative art and compatibility to the general wellbeing of the Society.

During the years, the Society has received many donations, most we still have today (**):

Historically OSA been a home for conservative and objective art.  Until 2018, there were no paid employees other than on bid and contract. Today, OSA is still an educational group though class offerings encompass a large variety of mediums with subjects both in traditional and in more abstract styles.  OSA is no longer considered a “society” but a “community” with the mission to promote the visual arts throughout the diverse communities of the region.

Classes and workshops are now offered both online and in-person to artists of all levels of ability.  The Gallery has a new show every month with the intention of helping artists, both members and non-members, to get their work before the public.  OSA’s board of directors is a group of hands-on volunteers, much like the Society’s founders.  A great deal of the maintenance of the building and the garden are taken care of by these volunteers.  The true spirit on which OSA was founded is as alive today as it was in 1926.  Thank you.

Presidents of Oregon Society of Artists